Stop the bicycle, I want to get off

Linda Pastan, To a Daughter Leaving Home by poemelfApril 26, 2011

To a Daughter Leaving Home

When I taught you

at eight to ride

a bicycle, loping along

as you wobbled away

on two round wheels,

my own mouth rounding

in surprise when you pulled

ahead down the curved

path of the park,

of your crash as I

sprinted to catch up,

for your life, screaming

“I finally found it!” my daughter texted me from her new apartment in Chicago.  I had hidden “To a Daughter Leaving Home” in her closet a few weeks ago as I helped her move.  Her text reminded me of the bittersweet moment when I stood alone in her cell-sized bedroom, trapped by boxes, suitcases and laundry baskets, wondering where to hide the poem and trying not to cry, even though hiding poems is usually a whimsical activity for me.  And that memory reminded me of the first really big goodbye, five years earlier in her freshman year dorm. Six hours from home, not even eighteen years old, she stood in the middle of her new room, just as cramped as the post-graduate one, surrounded by some of the same moving gear, and wept.  I rushed away to make parting easier and cried half the drive home.

This leave-taking, it just never stops.  One goodbye prepares us for the next, but doesn’t make it easier.

Which is exactly what goes on in this poem.  The small moment of letting go of a bicycle is a precursor to a bigger letting go later on, when the daughter leaves home for college, for a job, for marriage, for necessary independence.  This pattern repeats itself until the ultimate leave-taking, death.  It’s what Joni Mitchell sings about in  “Circle Game,” a song I dislike and resent for the power it has over me.  I can’t hear the chorus without getting misty-eyed:

And the seasons they go ’round and ’round

And the painted ponies go up and down

We’re captive on the carousel of time

We can’t return we can only look behind

From where we came

In the circle game

Circles figure in this poem as well.  The curved path, the round wheels, the mother’s rounded mouth, all point to a cycle (pun intended), the universal cycle which has existed from the beginning of time, the cycle of children separating from parents. We separate again and again, beginning with birth, and then the goodbyes never stop—Goodbye, goodbye! I’ll miss you! Be careful! –on the first day of kindergarten; as the car pulls out of the driveway with a newly licensed driver; as the prom limo rolls down the street; as children have children and leave with their new families after Thanksgiving dinner for the long ride home.

Out of all these moments of separation, Pastan focuses on a small one, the instant a parent lets go of a child on a bicycle.  Riding a bike, if you remember, is a big step towards independence.  Suddenly you’re free to go farther from home, to hang out with other kids on bikes, to ride without hands, to ride until you’re lost, or to the drugstore to buy candy, all away from the watchful eye of parents. 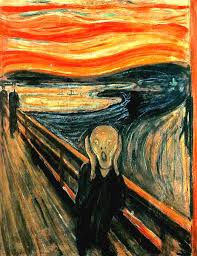 The mother in the poem revels in the vitality of the girl, while at the same moment she worries over her daughter’s vulnerability.  In few words and ordinarylanguage, Pastan deftly covers both sides of the experience:  the joy of watching kids learn new skills and the pain of realizing that those new skills reduce their need for us.  The poem reminds me of those optical illusions where the young woman becomes an old crone when turned upside down.  There’s a flip side to each action in the poem:  the mother’s mouth rounds in surprise, a happy emotion, but anyone looking could also think of Munch’s “The Scream.”  The daughter screams with laughter, but screams can also signal pain.  The girl’s hair flaps in the wind, suggesting speed and fun, but also suggesting to the mother a handkerchief, an object which suggests to the reader tears and nose-blowing.  The daughter pumps her legs “for her life,” meaning with great enthusiasm, “as if her life depended on it.”  But the phrase works on a literal level too:  the daughter can only create a life if she separates from her hovering mother.  She has to move away.

This poem is all about movement.  Notice how few nouns there are and how strong the verbs are:  loping, wobbled, rounding, pulled, waiting, sprinted, pumping, screaming, flapping, waving.  The form too creates a feeling of movement.  The constant line breaks keep the eye moving forward and creates suspense—when is this sentence going to rest?—is the daughter going to fall?—until we arrive safely at the final and only period.

Linda Pastan was born in the Bronx in 1932. She graduated from Radcliffe, and while there beat out Sylvia Plath for Mademoiselle’s poetry contest.  (Imagine a women’s magazine having such a contest today!)  She earned her masters at Brandeis, got married, had three children and gave up writing for 10 years.  Her husband, bless him, grew tired of her saying what a great poet she could have been if she hadn’t married, and so pushed her to return to writing.  She’s won multiple awards (among them the Ruth Lilley Poetry Prize for lifetime achievement), and was the poet laureate of my beautiful home state of Maryland from 1991-1995.

I’m falling in love with this woman.  I admire her struggle to balance family life with the artistic life, a struggle reserved almost exclusively for women; and I love love love her poems, many of which I’ve read and cherished without knowing they were her poems.  One of them, “The Happiest Day,” never fails to nudge me towards gratitude.

There’s a charge leveled at women writers, often unexpressed, that their territory is small, their skills of invention limited, their imaginations not broad enough.  Even writers as elegant and insightful as Austen and E.M. Delafield have been dismissed as mere domestic explorers.  Throughout her career Linda Pastan has also explored family life and women’s lives.  I revere her for it.  Her sharp eye, her shrewd understanding, her experiences so deeply felt and beautifully expressed make her not a lesser writer than someone writing about war or politics, but a great big writer, a universal writer.

No wonder she has recently been translated into Chinese, in a book with a picture of a girl on a bicycle on the cover.