Fruit and shade in Minnesota

May these vows and this marriage be blessed.

May it be sweet milk,

May this marriage be full of laughter,

our every day a day in paradise.

a seal of happiness here and hereafter.

May this marriage have a fair face and a good name,

as the moon in a clear blue sky.

how spirit mingles in this marriage.

A very urban, very cool San Diego couple weds on a farm in Minnesota and Poem Elf is invited.  The question isn’t so much what to wear (wedges and flats for all, fascinators and Stingy Bogarts for hipsters only), but what poem to bring.  Weeks earlier on a whim I had sent a poem to the groom, my nephew.  “I didn’t get it,” was his polite way of saying “Thanks, but no thanks.”  (I’ll post on that next week.)  So I thought I’d play it safe with something by Rumi.

Rumi, a 13th century poet virtually unknown in this country 20 years ago and now the most popular poet in America (sorry, Billy Collins), is a poet I have avoided until recently when he was listed on cultural critic Dean Radar’s list of the top ten poets of all time.  I’ve been wary of him because he’s a little too unstructured for my taste and overly emotional, which made me wonder how serious a poet he was, and besides, I resented the shelf space he’s given in the poetry sections of most bookstores.

But as usual, the more time I spend with a poem, the more I like it; and the more I think about the connection between poem and location, the more reasons I find for the match.  So in spite of the fact that Rumi was a practicing Sufi (a mystical branch of Islam) born in what is now modern day Afghanistan, and this was a 21st century wedding in America’s heartland officiated by a minister, the poem and the wedding share common ground.  For one thing, “This Marriage” uses images from the earth to bless and describe a new marriage, which makes it an appropriate choice for a wedding that made much use of natural settings.  The ceremony was held outside, the guitarist sat on a haystack, the floor of the dining tent was grass, and the backdrop for every picture was rolling hills and country roads.

The poem quietly moves from day (the shade of the date palm is presumably from the sun) to night, just as the wedding floated from cocktails in the late afternoon to late-night dancing upstairs in a barn fitted with large windows that looked out on moonlit fields.

In Rumi’s poem the groom blesses his own marriage.  He slips from the impersonal this marriage to the more intimate our. Then he reverts to this marriage, as if it were someone else’s marriage, until emotion seems to overtake him and he opens up to I in the last few lines.  At the Minnesota ceremony, the rings were passed from guest to guest to be blessed, and when at last they reached the minister, the bride and groom exchanged vows, very tender expressions of love and commitment.  The moment was so intimate that I had the sense of the couple being torn open from stem to stern for all of us to gape and gawk at their interiors.

Right after the ceremony I had a lovely moment with my nephew.  He was sitting alone on a bench while his new wife was occupied with bridesmaids and the photographer.  “Come over,” he called to me. I was pleasantly surprised and flattered that he wanted my company but also touched in my auntily fashion at his demeanor.  He looked stunned.  Clearly he was still processing what just happened.

Of all the unforgettable moments of the day, the vision of him sitting on the whitewashed bench stands out.  A man overwhelmed by love.

In our brief time before the photographer (who we later found out was an excellent dancer) called him away, we discussed how he had publicly declared the deepest, most intimate feelings a man could have, and the joy he felt in doing so.  “I almost have a headache from feeling so much happiness,” he told me.

That’s exactly what happens at the end of this poem.  After twelve lines rhapsodizing about the marriage, the poet is overwhelmed by love and is rendered speechless:

how spirit mingles in this marriage

It’s very different from the “Song of Songs,” which speaks more about the body and physical desires.  “This Marriage” is all about spirit, and (like the “Song of Songs”) may be an allegory for union with the divine.

I love that, fruit and shade:  marriage as a refuge from heat, and as a source of sweetness and nutrition.  Fruit, of course, is also an image of fertility and abundance, an idea suggested earlier in the poem by sweet milk. 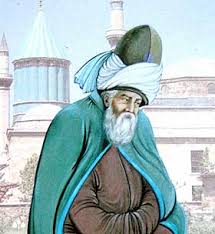 Rumi, born to a wealthy family in 1207, eventually settled in modern day Turkey.  He wrote over 70,000 verses in 25 years or, as I figure, about 7 ½ poems every day.  A religious figure, he is considered a Muslim saint.  His staying power comes not only from the beauty and emotional expressiveness of his poems, but his teachings of tolerance and peace.  He’s such towering figure of interfaith unity that Pope John XXIII was moved to say in 1958, “In the name of the Catholic World, I bow with respect before the memory of Rumi.”

A pretty good omen for the joining of two people, that Rumi.  Or in Rumi’s own words,

as the moon in a clear blue sky

which is exactly what I saw when at the end of the night I left the barn and looked up to take in the view.