“Where have I come from, where did you pick me up?” the baby asked

She answered, half crying, half laughing, and clasping the

baby to her breast-

“You were hidden in my heart as its desire, my darling.

You were in the dolls of my childhood’s games; and when with

You were enshrined with our household deity, in his worship

In all my hopes and my loves, in my life, in the life of my

mother you have lived.

been nursed for ages.

When in girlhood my heart was opening its petals, you hovered

as a fragrance about it.

Your tender softness bloomed in my youthful limbs, like a glow

in the sky before the sunrise.

Heaven’s first darling, twain-born with the morning light, you

have floated down the stream of the world’s life, and at last you

have stranded on my heart.

As I gaze on your face, mystery overwhelms me; you who belong

to all have become mine.

For fear of losing you I hold you tight to my breast. What

Where do I come from, Mommy? is a question most children ask.  (Usually not, however, as early as the infant in the poem.)  For some parents the question is the chance they’ve been waiting for to expound on ideas ontological or anatomical. For others it’s an uncomfortable confluence of two bugaboo subjects—sexuality and spirituality.

Prudish parents of the past might have skirted around the question with talk of birds and bees, a visit from the stork, or a trip to the baby store.  Today’s more enlightened parents (or maybe just more verbose) might discuss mommy and daddy’s “special hug” (is it just me or is this off the charts in the ick factor?) or describe in confusing detail the sperm’s pursuit of the egg.

But I can think of no answer to Where do I come from? as beautiful as the one the mother in this poem gives her baby:

When in girlhood my heart was opening its petals, you hovered as a fragrance about it.

The poem combines a powerful message of parental love–

What magic has snared the world’s treasure in these slender arms of mine?

with a spiritual claim for the existence of the soul–

with a nearly scientific explanation–

twin-born with the morning light, you

have floated down the stream of the world’s life, and at last you have stranded on my heart.

Or at least I see that as a scientific explanation.  Maybe because I’m the daughter of a physics professor, that line calls up an image of a light wave floating around the universe for eons until the light, landing on the mother’s heart, becomes more particle than wave and comes to fruition in the womb.  (Note:  if you are a scientist or have any training in the sciences, pay no attention to that woman behind the curtain. Pay no attention!)

“You who belong to all have become mine” sounds like an idea based on the First Law of Thermodynamics, that is, matter cannot be created or destroyed.  We are all made up of the same matter, matter that has existed in various forms since the beginning of time.  Regardless of religious beliefs, the First Law of Thermodynamics connects us to each other and to the earth.

Pseudo-science aside, it’s hard to believe this poem was written by a man.  “The Beginning” is tender, full of what is traditionally thought of as “feminine” sentiment.  A little girl plays with dolls and dreams of her future children.  The poet celebrates maternal love, not as a rigid way of defining gender roles, but as the primary creative force in the universe.  The child is loved by the mother of all mothers, the “deathless Spirit.”  This deity is clearly female.  She breastfeeds her babies, just as the God of the Old Testament in one passage is characterized as nursing her people.

Deep, soulful parental love imbues a child with a sense of her specialness.  Of course parents can go overboard with telling a child how special he is.  We’ve all witnessed failures of the self-esteem movement.  But when the specialness comes not from how well the child climbs the jungle gym but from a tremendous, a priori love from parents human and spiritual, security takes root.  And from security, responsibility.  A passage by Jewish theologian Martin Buber has always stuck with me, probably because it echoes what the nuns used to tell us:

“Every person born into this world represents something new, something that never existed before, something original and unique.  It is the duty of every person . . . to know . . . that there has never been anyone like him in the world, for if there had been someone like him, there would have been no need for him to be in the world.”

How wonderful if every child could have such knowledge.  For that reason I hid this poem in a bag of laundry I washed for South Oakland Shelter.  S.O.S. is a local Detroit organization that houses and feeds the homeless in shelters that rotate weekly from church to church and synagogue to synagogue.  Volunteers serve breakfast and dinner, and provide beds, bag lunches, showers, and transportation. It’s a beautiful program because the homeless come right to the tidy doors of the suburbs.  The ease of volunteering brings in many who might not choose to go to an inner city shelter.  It’s beautiful too because the homeless can feel part of a wider community.  I know I’m always going on and on about connection, but connection is what we all crave, especially those who can feel invisible at best and despised at worst.  Tagore’s poem speaks to each person to say that they are loved, they are a special part of the universe, they are a beautiful mystery.

Even for those who had an abusive mother or no mother at all, this poem offers a universal mother’s love.  Poet Rabindranath Tagore lost his mother in early childhood.  Perhaps this poem is a re-creation of the mother’s love he missed. 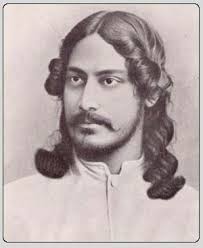 If you can put a western label on an eastern figure, Tagore (1861-1941) was surely a Renaissance man.  Born in India, he was a poet, novelist, composer, playwright, educator and painter.  And he was not just a dabbler.  He was the first non-European to win the Nobel Prize in Literature, he wrote the national anthems for India and Bangladesh, his plays are still performed today, he founded a university, and his work in music and writing has influenced sitar maestros and poets from Neruda to Paz.  He was a close friend of Ghandi and Nehru, his work was championed by Yeats and Pound, and he was a very handsome man to boot.

After finding (or inventing) scientific ideas in this poem, I was excited to learn that Tagore was interested in physics.  He met with Albert Einstein a few times in 1930.  If you’re curious about theories of causality, you can read a transcript of their conversation here.  I found the discussion a little dry until the two got around to music and improvisation.  Who knew Einstein was so interested in music?

More to the point, who knew about Tagore?  I didn’t anyway.  It’s humbling, isn’t it, to discover such a towering figure of global culture.  Makes me realize that the gaps in my education are much, much bigger than the ones I’m already aware of, like those in science and sitar music.