The bough will break, but sleep, baby, sleep

To Say Before Going To Sleep

have someone to sit by and be with.

I would like to cradle you and softly sing,

be your companion while you sleep or wake.

in the house who knew: the night outside was cold.

and outside to the world and to the woods.

The clocks are striking, calling to each other,

and one can see right to the edge of time.

Outside the house a strange man is afoot

and a strange dog barks, wakened from his sleep.

Beyond that there is silence.

My eyes rest upon your face wide-open;

and they hold you gently, letting you go

when something in the dark begins to move.

I left this poem in a drawer by my mother’s bed during a sisters’ weekend in Chestertown, Maryland.  First, because my mother is a good sport with these staged photos.

But mostly because she was a great singer of lullabies.  Her low tuneful voice, soothing even now in memory, eased her eleven babies to sleep.  “Nighty-Night” and our family favorite, “Lulla-lulla Bye Bye,” were her signature songs.   Through the wonders of youtube, I found that the songs I thought were hers alone had a wider audience.  You can listen to them here and here.  (Warning to my siblings:  Paul Robeson’s version sounds very different from Mom’s.)

My mother’s kinship with “To Say Before Going to Sleep” begins with lullabies but ends with the title.  She would not say this poem before going to sleep.  She would say her prayers.  Poet Rilke grew up in a Catholic household, so surely he was taught to kneel at bedside every night with a German version of “Now I lay me down to sleep.”  But Rilke, who rejected religion and replaced it with art, here replaces the normative bedtime prayers with his poem, a poem about a desire to comfort and protect. Comfort and protection, of course, are often prayerful requests made to deities.

He offers his beloved (not necessarily a baby in this poem) the comfort of his lullaby and the protection of not knowing the menace that threatens such comfort.  There’s a clear contrast between the danger outside of the house and the peace inside the bedroom.  Only the poet, positioning himself between the sleeper and the world, is aware of both at once. Inside there’s light enough to see a beloved’s face.  Outside, darkness and the unknown.  Inside, soothing lullabies, predictable as breathing.  Outside, random noises that startle—a clock striking, a dog barking, a stranger’s footfall.

The most famous lullaby—“Rockabye Baby”—plays with a similar dichotomy.  As a mother cradles her baby safely in her arms, she sings of danger, of the baby falling from a tree limb.  Strange that such a song would be soothing, and yet it is.  A heightened sense of danger can bring out a heightened tenderness.  The two play off each other like light and dark in chiaroscuro.

The poem affects me in ways that are mysterious.  How does Rilke, with such simple, straightforward language, move me to emotions I can’t fully articulate?  The poem taps into unsettling feelings the way fairy tales do.  The situation, the noises, the characters of the stranger and of the sleeping beloved are archetypal.  Rilke builds the dream-like feel of the poem by a stealthy transition from a vague longing in the beginning:

to a specific moment in the end:

My eyes rest upon your face wide-open.

But there’s something else here.  Something that makes this poem belong to me, as if it’s part of my body, pulsing inside.  After I read it for the ninth time, I realized what it was.  I love this poem because I’ve lived it.

Last year as my father-in-law lay dying in a hospital bed, unhooked from the respirator and feeding tube, I sang to him as he drew his very last breaths.  Earlier in the day the doctor had said he wasn’t “in there” anymore, that he felt no pain or awareness as his heart and lungs gently finished out their work.  But the late-night nurse said, You never know. She smoothed his blankets and dimmed the lights, a quiet form of respect I will always admire her for. Talk to him, sing to him, she said kindly, but matter-of-factly, like she was reminding me to wipe down the counters after I rinsed the dishes.

So I sang him all the songs he used to sing to us and to his grandchildren.  Mostly I sang “Mairzy Dotes,” over and over and over because it’s a happy little tune and I knew all the words.   My voice cracked sometimes when I thought about what was happening.  But I kept on singing, because singing brought back the past so sweetly and held the future at bay.  I sang until his breath rattled in his throat for the third time and the nurse confirmed that he was truly gone.

Rilke’s poem is so connected to that experience that I read it with wonder. 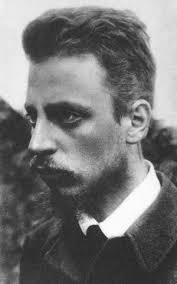 Ranier Maria Rilke (1875-1926) born in Prague, then part of the Austro-Hungarian empire.  His given name was Rene, so he was a boy with two feminine names.  His mother, grieving from the loss of an older daughter, not only named Rilke as if he were a girl, she dressed him as one until he went to school.  Not surprising that his childhood was unhappy.

He left the military academy his parents had enrolled him in, and studied at university.  He spent time in his “spiritual fatherland,” Russia before the revolution, and there he met Tolstoy.  In Paris he worked as a secretary for the sculptor Rodin, and knew Cezanne.  He travelled all over the world and, according to some sources, earned a reputation as a freeloader.  He was called back to Austria during World War I and died at age 51 of leukemia.

Relevant celebrity trivia of the day:  Lady Gaga has a Rilke quote tattooed on her arm.  You can’t read it from the picture (besides, it’s in German), so here’s what it says:

“Confess to yourself in the deepest hour of the night whether you would have to die if you were forbidden to write. Dig deep into your heart, where the answer spreads its roots in your being, and ask yourself solemnly, Must I write?”