A different kind of Disney princess

in the kitchen passing gas;

on the floor, weeping;

or the poinsettia that pretends

its leaves are flowers;

off the steamed walls.

When you have nothing to say,

the sadness of things

In a tribute to Ruth Stone on her 95th birthday, poet Sharon Olds called her the “mother of mourning, mother of humor.”  “Interim” offers a glimpse of Stone’s credentials for those honorifics.  Humor keeps company with sadness in the poet’s ramshackle room.  Stone, in her nineties with failing eyesight and hearing when this poem was published, observes the objects surrounding her with an eye original, amused and mournful all at once.  And marvelously subtle.  The flatulent radiator, weeping mop, decaying paint, and delusional poinsettia mirror her sadness but also suggest the realities of old age. 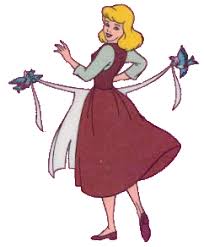 The anthropomorphism in the poem reminds me of the heroines in Disney movies.  Cheerful birds and mice assist Cinderella with her chores, Ariel’s fishy pals disrupt the prince’s ill-advised wedding; chipmunks and deer befriend lonely Sleeping Beauty.  Stone’s morose furnishings are equally helpful:  they enable her to express sadness.  But these objects embody more than just her sadness.  They embody a sweetness and generosity that are part of Ruth Stone’s legacy as a teacher and poet.  Her anthropomorphized objects kindly agree to act as her spokesperson:

When you have nothing to say,

the sadness of things

In my imagined Disney movie of Stone’s life, her mop takes calls while she lies abed:  Ruth can’t come to the phone right now, she says she’s feeling blue.

With its poinsettia and working radiator, “Interim” is a winter poem, but I had reason to post it now in early—shockingly early—spring.  I’ll allow T.S. Elliot lines about April a well-deserved rest, but spring is indeed a difficult time to be sorrowful.  Nature’s tenacious drive to grow and blossom, all that juice and all that joy as Hopkins says, presents a bitter contrast to anyone weary and deadened.

I taped the poem to what’s left of a tree near a sidewalk much favored by walkers and runners.  Every time I pass by those disembodied logs, my spirit sags in sympathy.  Once upon a time a tree, with all the initiative and ingenuity of youth, grew around a power line.  And was chopped down for the effort.  The axmen left these two pieces behind as warnings to other trees, like guillotined heads impaled on spikes to dampen the rebellion.  (Writing this reminds me of something I love about  Stone: she never overwrites, overdramatizes or turns maudlin.)

Recognition came late to Stone.   She wrote in relative obscurity and poverty most of her life.  In her late eighties, she won the National Book Award and in her nineties was named the Poet Laureate of Vermont.  When she died last November at age 96, every major paper around the globe printed a worshipful obituary.

Ruth Stone (1915-2011) was born in Roanoke, Virginia but grew up in Indianapolis.  Her father was a typesetter for the Indianapolis Star and a part-time drummer whose gambling addiction kept the family in near poverty.  Still, hers was a happy childhood, full of music, literature and fun-loving relatives.  Her mother read her Tennyson while she was a toddler, and her grandmothers and aunts engaged her in their love of reading and writing.

She married young, to a chemist, had a daughter and ended the marriage when she fell in love with professor and poet Walter Stone.  They had two children together and their poetry careers were just taking off when he hung himself on a coat hook in their London apartment.  She never got over his suicide.  In an interview with NPR when she was 89, Stone said, “I think every year – let’s see, he’s been dead maybe 40–some years — I think every year or every day or something, that it won’t come back — the pain. And it always does.”

She struggled as a single mother of three girls, travelling across the country from teaching post to teaching post to support the family.  She eventually settled at SUNY Binghamton and then moved to rural Vermont.    I like this story poet Chard DiNiord tells about when he visited her towards the end of her life:

I didn’t know Ruth before I interviewed her and really didn’t know what to expect when I showed up at her rundown, three-room apartment on Waybridge Street in Middlebury, Vermont. She didn’t open the door at first, fearing, I think, that I was a scam artist. My wife sat on her porch while I went for a brief walk in the hope that she would eventually open her door. While I was gone, she looked out her kitchen window and saw my wife sitting in one of her metal chairs. Although nearly blind from a botched eye procedure, she could still make out figures and colors. She emerged from her apartment in a flannel shirt and corduroy pants and sat next to my wife, taking her hand and immediately engaging her in conversation.

And this, from the subsequent published interview:

CD: You are, and that’s a great thing.

CD:  Your humor complements your grief in a way that helps you write about loss without becoming morose.