In her white muslin evening dress.

‘Who the hell do you think you are

Running out to dances in next to nothing?

As though we hadn’t enough bother

With the world at war, if not at an end.’

My father was pounding the breakfast-table.

‘Those Yankees were touch and go as it was—

If you’d heard Patton in Armagh—

But this Kennedy’s nearly an Irishman

So he’s not much better than ourselves.

And him with only to say the word.

If you’ve got anything on your mind

Maybe you should make your peace with God.’

I could hear May from beyond the curtain.

‘Bless me, Father, for I have sinned.

I told a lie once, I was disobedient once.

And, Father, a boy touched me once.’

‘Tell me, child. Was this touch immodest?

Did he touch your breasts, for example?’

‘He brushed against me, Father. Very gently.’

Even though the events in Paul Muldoon’s “Cuba” take place in Ireland and during a time when I was still weeks away from being born, the poem for me is like an old family slideshow.  Muldoon’s sketch of secrets and guilt in an Irish Catholic family— a father shouting end-of-the-world scenarios, an awkward moment in the confessional booth, an older sister radiant in her party clothes—pulls me into this poem so forcefully that I’m all flush with fever and starting to hum “Killing Me Softly.”

Like the speaker in the poem, I have many memories of my older sisters that center around the clothes they wore. Annie, going out to places unimaginably glamorous in her magenta wide-legged jumpsuit that plunged at the neck, tied under the breasts and exposed strip of stomach. Ceci going to the Hungarian Ball in a full-length corduroy zebra coat my mother sewed for her. (Attending such an event was so out of character for my family that Ceci might as well have been Eliza Doolittle.)  Susie emerging from the girls’ room in a swinging blue skirt and belted top, very Bonnie-and-Clyde with a long strand of pearls and a beret. Entire seasons can be pulled out of time by a single outfit.  Summer is Susie sunbathing in the backyard in a floral bikini.  Winter is the lemon-yellow cardigan Ceci knitted, heavy as a protective x-ray vest. Fall is her purple and orange patchwork coat with big lapels. Spring is Annie in a white eyelet graduation gown with a yellow grosgrain ribbon tied around the empire waist, her blond hair lifting in the wind, as beautiful to us younger girls as I suspect May was to her brother when she came home at dawn.

The father in the poem pounding the table to make a point brought me right back to my father getting angry over the length of skirts and my brother’s hair. Or how the Russians or Chinese would be taking over our country without a single bullet being fired.  Of course it’s easy to feel amusement or resentment towards these kinds of  authoritarian fathers, but I have sympathy and respect for them as well.  Struggling to support large families with hardly any money, they were serious men who had fought in war and saw the stakes as high.  Survival, safety, salvation.  So while it’s funny, it’s also understandable that with the Cuban missile crisis looming, the father in the poem jumps from May’s lightweight dress to rape to nuclear war to the final judgment in a few pounds of his fist.

The poem is built on contrasts:  two leaders, “Old Blood and Guts” General Patton and the untested Kennedy, “not much better than ourselves”; May’s confession of a lie and a truth; two overheard conversations, one loud and accusing, the other quiet and inquiring; and two fathers, both worried over May’s budding sexuality. But it’s the contrast of two gestures that’s at the heart of the poem: the father pounding the table, the boy brushing against May’s breasts.

The darkness of the confessional booth brings the innocence of the boy’s gesture to light. In contrast to the violent anger of the father and the violence of a possible nuclear war, the boy’s touch is almost holy.  May, pure and lovely in her white dress, stands apart from the prurient thoughts of the adults around her.

(Listen to Muldoon read “Cuba” here.  His inflection of “very gently” nails the poem for me.  His reading also changed the way I understand the priest.  I had thought the priest was creepy, but hearing Muldoon speak his lines, I can see how the priest’s calm demeanor and gentle authority allow May to speak truthfully.)

I left “Cuba” in the pocket of a dress at a charity thrift store in Rehobeth Beach, Delaware.  I was there dropping off the clothes that no one wanted from a clothing exchange we had at a family reunion this past summer.  (Our clothing exchange is an hours long event.  Sisters, sisters-in-law, nieces and even my 87-year old mother all try to convince each other to take their cast-offs.  A lot of the sell is in the memories the clothes evoke—how could we pass on a dress that looked so pretty on Wizzie at a family wedding?  Or any item my mother has worn? In most cases, however, good sense prevailed over sentimentality, and I lugged four big bags of clothes to the thrift shop.) 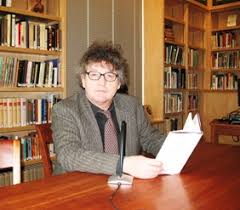 Paul Muldoon was born in 1951 in Northern Ireland, to a Catholic family in a mostly  Protestant area.  His mother was a schoolteacher and his father was at various times a shopkeeper and a farmer.  Muldoon went to Queen’s College in Belfast and stayed there to work as a producer for the BBC.  Since 1971 he’s published dozens of volumes of poetry and won many prestigious awards, including the Pulitzer Prize.  He teaches at Princeton University and serves as the poetry editor for the New Yorker.

In addition to poetry, Muldoon has written children’s books, plays, the libretti for operas (including one based on the life of Frank Lloyd Wright), and rock lyrics for the late great Warren Zevon.

Interesting story:  Muldoon once wrote a fan letter to Zevon but heard nothing back.  A year later, Zevon contacted him and asked him to write a song for him.  The result was “My Ride’s Here” and “Macgillycuddy’s Reeks” both on Zevon’s final album.

With his bushy hair, glasses and air of a man indifferent to fashion and personal grooming, Muldoon looks like the consummate professor.  He uses that persona to great effect in this very funny video he made with Princeton’s Tiger Magazine. It made me laugh out loud.