Friends along the way

Once on a plane

a woman asked me to hold her baby

I figured it was safe,

our being on a plane and all.

How far could she go?

She returned one hour later,

having changed her clothes

and washed her hair.

I didn’t recognize her.

By this time the baby

and I had examined

We had cried a little.

I had a silver bracelet

in the baby’s ears.

She wore a tiny white dress

I did not want

to give her back.

My mother gets tired.

The baby left my skirt crumpled,

the little nub of dream

as she feels ill at ease,

What will she forget?

Whom will she marry?

He’d better check with me.

I’ll say once she flew

between two doilies of cloud.

She could slip the card into a pocket,

Already she knew the small finger

was funnier than the whole arm.

I was flying to Fort Lauderdale to meet my mother and some of my sisters. My plan was to leave “Wedding Cake” in the seat pocket, sandwiched between the in-flight magazine and the sky mall catalogue.  But we passengers were sandwiched too, packed so tight that every sniffle and stomach gurgle seemed to originate from a communal body of seatmates, and I didn’t feel like making a spectacle of myself leaning away from the seat pocket to get a decent picture.

’m glad I held on to the poem because I found a better spot for it later in the trip.

One day we heard that the owner of the hotel/condo we were staying in was having a huge birthday bash at the tiki bar downstairs, with a DJ and “Drink Girls.”  The “Drink Girls,” our tiki bar waitress explained, were hookers. None of us middle-aged suburbanites see prostitutes on a regular basis, and we wanted to watch them in action.

The tiki bar, being the last of its kind in Ft. Lauderdale, grandfathered in after beachfront tiki bars were outlawed, was crowded with a young and hormonally fired-up crowd. We had trouble distinguishing between the hookers and the bar patrons.  Young women in fishnet stockings and unzipped Daisy Dukes sauntered around selling shots, delivered with flair and in unusual serving positions. But other young women, dressed almost as provocatively, touched themselves as if they were showering and shook their body parts with an earnest determination to attract the attention of men far less attractive than they. To us it was all Sodom and Gomorrah, but to everyone else, we were the spectacle.  We must have looked like the summer stock cast of The Crucible.

After a while we got tired of the scene. We got up to go just as my mother was served a full beer she couldn’t drink.  No wanting to waste the beer, we brought it to a rowdy table of women at a bachelorette party.

I offered the beer to the bride on behalf of my mother.  “She’s 88,” I told her, “and she was married for over sixty years and had 11 children.  So this is good luck to you from her.”  The table cheered and the bride greeted my mother warmly, albeit drunkenly. As people do at those kinds of milestone parties, the group absorbed the moment into the story of their evening, and my mother became to them what my sisters and I call “Friends Along the Way.” Friends Along the Way are strangers you meet on group outings who bond with you on some deep or joyful level. Friends Along the Way love connecting with your group and in turn are loved and petted.

My mom is pretty cute and no doubt her beer offering was adorable just because she’s 88 and they were young and wild. But the moment was more than that.  Maybe seeing the bride in that atmosphere of hookers and hooking up made us feel protective towards her. Like the speaker in the poem to the stranger’s baby, we each became the bride’s “secret guardian.”   Knowing my sisters and mother as I do, I‘m pretty certain that many silent prayers were said for her, asking she be blessed with a long and happy marriage.  She’ll never know that, which is part of the beauty of the encounter to me.

As luck would have it, on the next day we were seated for lunch at the very same table. Which is where I left the poem.

That’s a long story to show how Naomi Shahib Nye’s “Wedding Cake” is suited to its site. The protective feeling the speaker has towards the baby and the unexpected connection between two strangers are exactly what we experienced with our bride on her “Final Fling.”

On to the poem itself.

Being left with a stranger’s baby on a plane for an hour is a Billy Collins kind of moment.  Like Collins, Nye has a light touch, a droll perspective. But Billy Collins couldn’t have written this poem.  Such situations rarely happen to men, and if they do, it’s all Three Men and a Baby and Do I Really Have to Change This Diaper?!  Mothers, on the other hand, often ask other women to hold their babies—probably not for an hour, but still, mothers need a free hand now and then and sometimes have to rely on the kindness of strangers. But the absurd situation is not at the heart of the poem. “I did not want/to give her back,” the speaker says. A connection has been forged, a connection that goes beyond the physical pleasures of holding a beautiful baby.

Dressed so fancy in her white dress with little gold earrings, the baby seems to me Hispanic.  I mention this because cultural exchange is central to Nye’s work.  In an interview with the online journal Cerise, she offers her recipe for increasing tolerance:

The speaker and the baby are traveling in a plane, above borders, free to connect across cultures, age difference, time, language or the lack of it.  Spending time with the baby, the speaker begins to identify with her.  They both cry.  They both wear jewelry.  The baby even wears what looks like a wedding dress, a signature dress in a grown woman’s life. Even without a common language—the baby presumably doesn’t speak—the speaker bonds so deeply with the baby that she can “read” the baby’s curls. They will become part of each others’ future lives.

The poem leaves me with some questions, as poems usually do. Does anyone have idea about these lines:

She could slip the card into a pocket,

and pull it out.

What’s the card?  Did the speaker write this poem on a card and imagine the baby keeping it as she grows up?

I’m also mulling over the end.  I’m interested in how other people understand this:

Already she knew the small finger

was funnier than the whole arm.

I can picture the speaker tickling and teasing the baby with her little finger, or the baby examining her own pinkie.  This is presented as a lesson the speaker has imparted to the baby.  How else do the lines work in the poem? Why do they end the poem? 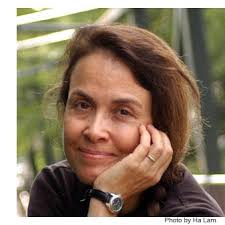 Naomi Shahib Nye was born in 1952 in St. Louis and identifies as an Arab-American. Her father was a Palestinian refugee and her mother American. During high school she lived for some time with her grandmother in Jerusalem and in San Antonio.

She’s written several books of poetry, children’s books, songs and novels.  She has traveled for the U.S. Information Agency on goodwill tours.  Her anthology for teens, The Space Between Our Footsteps, is a beautiful collection of paintings and poems from the Middle East. After 9/11, she spoke out against terrorism and against prejudice, and in 2002 she published a book of new and old poems she had written about the Middle East.

In 2009, PeacebyPeace named her a Peace Hero.  I didn’t know such a thing existed, but it’s a wonderful appellation and something we can all aspire to be.

She’s won multiple literary awards, including four Pushcart Prizes. She lives in San Antonio with her photographer husband and son.

You can hear her read here, a “found” poem. Her voice surprised me. I had expected a voice soft and gentle like her face, but she sounds more like your best pal in high school talking too loud the morning after you got drunk together.  Gravelly and fun.