to a young child

Presenting this poem, I feel as though I’m introducing an old friend to newer ones.  The old friend is an oddball, dressed in clothes from another era, caught up in pursuits even I don’t understand, a Suzanne-takes-you-down-to her-place-by-the river sort of person, but still precious to me, burrowed deep and claiming her plot in my heart’s territory.  I feel anxious that the new friends, polished, sensible people, won’t understand or like the old one.

Which is all to say, this poem and I go way back.

Maybe I was 7 or 8 years old when one of my older sisters studied “Spring and Fall” in high school.  Because I shared a name with the child in the poem and because my sister has always been sweet and thoughtful, she gave the poem to me one Christmas. Literally.  She printed it on parchment, burned the edges, and decoupaged it on a piece of wood. (Decoupage! Big in the 70’s.) She used to recite the poem to me in a voice you might use to tell stories of goblins and ghosts, a voice urgent and eerie.  I can still hear her, building the drama, picking up the pace with each successive alliteration and bouncy rhyme, and then slowing down to that killer last line: “It is . . . MARGARET. . . that you grieve for.”

Long before I understood them, I had memorized the first two lines.  Hearing my name in a poem!  I was famous!  Any attention in a family of eleven is like cupcakes for dessert (unexpected and eagerly devoured), and so the poem became part of my identity.  I associated myself with the young child of the poem, the one with “fresh thoughts,” the one who inspired such musings in an old man. (Actually there’s no reason to assume the man is old, just older, but that’s how I’ve always seen it.)

If my name wasn’t in it, surely I wouldn’t have liked it so much.  “Spring and Fall” is not an easy poem to understand. Although the speaker addresses a child, the convoluted syntax and invented words are not, in the parlance of 2010, child-friendly. Unless children were loads more intelligent in Victorian days than they are now, I suspect little Margaret’s understanding of this poem rested mainly in the joy-fest of words, the delightful sing-song way it sounds.  (This poem is just begging to be recited.  Go ahead, it’s fun.)

Just as the language is a little advanced for the poem’s stated audience, so is the message. The old man, observing the child Margaret crying, explains that she cries now and will continue to cry when she’s older, for the same reason:  because fall signifies the coming of death. She mourns the end of her own life even as she begins it.

What a message to give a child, we might think. Better enjoy jumping in the leaves while you can, kid, because you’re going to DIE. Our culture shields children from death.

The old family cat is just “sleeping”; grandma dies in the hospital where children aren’t allowed and then the casket is closed at the viewing so as not to upset anyone; and there are even those parents, Bruno Bettleheim be damned, who find fairy tales too morbid and disturbing for a young audience. (It will be no surprise that in my career as a mother I’ve erred on the side of hard truths too soon.)

The old man in the poem speaks truthfully to little Margaret, on the assumption that children know much more than they can articulate.

I’m reminded of another adult who speaks truthfully and unsentimentally to children: Mary Poppins, the P.L. Travers character, not the spoonful-of-sugar one. To modern readers, Poppins may seem brutal and unkind, but I loved her and read the Travers series over and over, even into my teen years. In a Paris Review interview, Travers explains Poppins’ nursery room demeanor:

She doesn’t hold back anything from them [the children]. When they beg her not to depart, she reminds them that nothing lasts forever. She’s as truthful as the nursery rhymes. Remember that all the King’s horses and all the King’s men couldn’t put Humpty-Dumpty together again. There’s such a tremendous truth in that. It goes into children in some part of them that they don’t know, and indeed perhaps we don’t know. But eventually they realize—and that’s the great truth.

I do think children, in their intimate relationship with nature—the hours spent with lightening bugs and dandelions, bees and slugs, grassy hills and falling leaves—understand something of mortality well before we anxiously read them Where’s Grandpa. Every beautiful thing children experience in nature dies or changes. Spring to fall, life bursts forth then dries up, crumples underfoot, blows away.

And so with Hopkins’ poem.  Spring and fall, joy and death.  Joy in the created world, in wanwood leafmeal and goldengrove, and joy in the act of creating poetry.  But then there’s the weeping, the ghosts, the sorrow, blight and death. 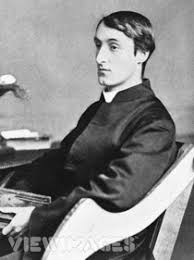 Gerard Manley Hopkins (1844-1889), brilliant Victorian scholar and poet, seems to have been an unusually intense man with a large capacity for joy (expressed in his religious faith and in poems) and just as large capacity for sorrow.  He suffered from depression his whole life.  Converting to Catholicism as a young man and becoming a Jesuit priest isolated him from his disapproving Anglican family and convinced him, for a time, that writing poetry was self-indulgent.  As a new priest, he burned his earlier poems, but returned to writing seven year later.  He was published little during his lifetime and found an audience only after death. In spite of his depression and the loneliness he felt living abroad in Dublin (he taught James Joyce), he insisted as he died of typhoid fever, “I am so happy, I have been so happy.”