A blue iris in autumn

It doesn’t have to be
the blue iris, it could be
weeds in a vacant lot, or a few
small stones; just
pay attention, then patch

a few words together and don’t try
to make them elaborate, this isn’t
a contest but the doorway

into thanks, and a silence in which
another voice may speak.

The first task I set myself when trying to penetrate this poem (oh dear—a disturbing image–sounds like I keep a sex toy by my bookshelf) was to Google “blue iris.”  Did it have a symbolic meaning or cultural significance that I was unaware of? No, but I discovered it sure is a popular name for spas, paint colors and cafes.  The significance of the blue iris in this poem is simply that it’s a spectacular, Grand-Canyon-kind of flower, and looking at it could lead to an awe-filled experience of the Sublime such as the Romantic poets were fond of.

That kind of lofty emotion, Oliver says, does not have to be the starting point of prayer.   It’s interesting that her own starting point is a negative statement.  Sometimes it’s easier to define a complex idea by stating what it’s not: love is not jealous, or love is not all, as Edna St. Vincent Millay would say (who is relevant to this discussion, as you’ll see shortly).

In the second stanza Oliver employs two more negatives:  “don’t try” and “this isn’t.”  A pattern emerges underneath the seeming loose construction of the poem.  The three negative statements fall in the first two stanzas of the poem; the third holds only positive statements. The negative sets a tone of unease, of struggle. To enter in a prayerful state, the stillness and divine presence described in the third stanza, requires letting go, whittling away extraneous experience such as feelings of inadequacy or competition.  Oliver whittles away in a very mathematical fashion:  the first stanza has five lines, the second three, and the third, two.  A tidy little subtraction problem for the work of beginning a prayer.

The invisible structure of the poem is evident too in the last words of each of the first two stanzas. (I know from reading Oliver’s very helpful book on poetry that last words of lines have special import.) The word “patch” bridges the first two stanzas and recalls, even as it’s used as a verb, the weeds she studies.  And the word “doorway” is just that—a doorway into the gratitude of the third stanza, into prayer itself.

Gratitude is at the root of all major religions, and so it’s no wonder this poem can be found on blogs by Christians, Buddhists, Muslims and Jews.  And Unitarians, of course.  The importance of gratitude may be today’s version of Kumbaya or have-a-nice-day-namaste, easy to dismiss as overused hokum, but, really, do you know any happy people who don’t radiate a spirit of gratitude, of wonderment?   Oliver seems to be a happy lady herself as is clear in her poem, “When Death Comes”:

When it’s over, I want to say: all my life

I was a bride married to amazement.

I was the bridegroom, taking the world into my arms. 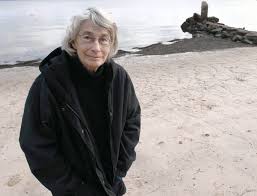 Mary Oliver was born in Ohio in 1935.  As a teenager she made a pilgrimage to the upstate New York home of Edna St. Vincent Millay.  She ended up living on Millay’s estate with Millay’s sister on and off for years. Millay was an early influence on Oliver (and you can read Oliver’s tribute to her predecessor here).  When I began writing this post, I would never have connected the two poets:  one is so formal, the other unpretentious and conversational.  (Listen here to Oliver’s plain-speaking recitation of a poem and compare it to Millay’s affected delivery.)  But now I see connections abound:  both are passionate lovers of nature, winners of Pulitzer Prizes, and are more popular with the public than with literary critics.

At the Millay house Oliver met photographer Molly Malone Cook, who was to become her partner of 40 years. (Six degrees of separation moment:  Cook was a close friend of filmmaker John Waters, who is the cousin of a good friend of my husband’s in high school, a boy I once kissed and who later told my husband he shouldn’t date me because I was too quiet.  Down, bitter girl, down.)

On a hike with some friends, feeling very grateful indeed for November sunshine and temps in the 60s, I taped the poem to a tree for the next hiker to find. I felt a little like a mother hiding holy cards in her grown children’s luggage.