Artist on the Playground

When I was a child

I played by myself in a

corner of the schoolyard

I hated dolls and I

not friendly and birds

If anyone was looking

for me I hid behind a

tree and cried out “I am

And here I am, the

center of all beauty!

I’ve kept a copy of this poem for years now, as if it belonged to me, as if it were a well-loved fragment of a baby blanket or a page ripped from a youthful diary.  I too was an oddball (some would quibble with the past tense here), a loner child, a quiet girl who chose not to speak in fifth grade, a high schooler who sometimes ate alone in the locker room.  Don’t cue the violins—I’m as amused by my own history as O’Hara is by his.  But when I used to present this poem to seventh grade creative writing classes, I was always surprised that no one found it funny. O’Hara’s clowning around was lost on them.

Perhaps the class missed the poem’s humor because of the exclamation points.  Maybe the Twitter generation uses exclamation points so profligately that they don’t get it when a writer overuses them to amuse.  I avoid exclamation points so as not to come off as chirpy and vacuous. I avoid wearing string bikinis and baby doll dresses for the same reason.   But these days everyone wants to sound like a breathless teenage girl.  As a result, a message delivered without exclamation points sounds either unenthusiastic or sarcastic.

The exclamation marks in the poem’s final stanza do double duty: first, they announce that the poet, in a very un-poet-like fashion, doesn’t take himself too seriously.  In spite of the Latin title, the poem and poet are decidedly unpretentious. The exaggerated misery of his childhood is matched by the exaggerated success of his artistic life, and signal that an elfish mind is at play.

But even as the exclamation marks subvert the meaning of the words they punctuate–And here I am, the/center of all beauty!–they don’t steer the poem towards sarcasm.  O’Hara achieves a tone of genuine surprise at the outcome of his life.  The exclamation marks come off as sweet, not snarky. He may not really think he’s at the center of all beauty, but he sure seems happy.

Joking aside, O’Hara makes the more serious point that artists are by nature outsiders.  “Literaria Autobiographia” becomes a quick sketch of the creative temperament in childhood. Playgrounds can be classrooms for conformity:  those who flaunt rules for games and social rules for blending in and getting along risk being ostracized.  The poet cannot or will not conform.  I am an orphan, he cries out.  He belongs to no one but himself.  The poet also, in typical writer-ly fashion, hides from others while at the same time he calls out for their attention and love.

O’Hara by all accounts grew up to be a very sociable man, not at all like the boy behind the tree.  In his elegy for O’Hara, poet Allen Ginsburg described him as “chattering Frank.”  If it weren’t for the fact that O’Hara was run over by a dune buggy and killed at age 40, this poem is a perfect fit for the “It Gets Better” campaign.  The Cinderella arc of the poem and O’Hara’s openness about his homosexuality at a time when most gays were closeted, might make a youtube video to rival Tim Gunn’s.

Like other O’Hara poems, this one has a spontaneous, just-winging-it feel.  He didn’t like formalism.  “I don’t even like rhythm, assonance, all that stuff,” he wrote. “You just go on your nerve. If someone’s chasing you down the street with a knife you just run, you don’t turn around and shout, ‘Give it up! I was a track star for Mineola Prep!'” Still, for a simulated improvisation, the poem is pretty darn tidy and neatly constructed, with four stanzas of four short lines each. 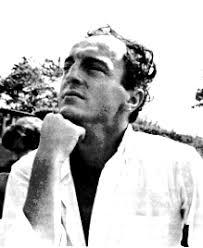 Born in Baltimore and raised in Massachusetts, O’Hara found his home in the artistic hive of Greenwich Village.  The list of his friends and associates amazes me and calls up an exciting world of cross-pollination. He roomed with Edward Gorey, worked for photographer Cecil Beaton, hung out with poets John Ashberry, Allen Ginsberg, LeRoi Jones (later known as Amiri Baraka), and artists deKooning and Pollock.  O’Hara himself worked across disciplines:  he was an accomplished pianist and jazz lover as well as a poet, playwright, and art critic, earning a living as a curator at the Modern Museum of Art. (In its second season, the TV show Mad Men wisely chose O’Hara as a symbol of nonconforming bohemia, of creativity used in the service of art not commerce —in other words, a symbol of everything Don Draper is not.  Link here for Don Draper reading O’Hara’s “Mayakovsky.”)

Placing this poem in Detroit’s world-famous Heidelburg Project was not my first choice (I imagined leaving it at a therapist’s office), but the more I thought about it, the better the fit seemed. Artist Tyree Guyton began the Heidelburg Project in 1986 after coming home from the army and seeing what a bleak and dangerous wasteland his neighborhood had become.  He wanted to create a safe and beautiful environment that residents could feel proud of.

He started with polka dots, an inspired decision.  What better than polka dots to lighten a landscape?  Today the polka dots grow from the street to the houses; even the trees are dotted with clear colored discs that catch the sunlight.  All manner of discarded items—stuffed animals, typewriters, telephones—are used with wit and humor.  Each weather-beaten and frayed piece of the project reminds the viewer of Detroit’s deterioration and gives hope for Detroit’s transformation. The ugly duckling made beautiful.  Just the right place for  “Autobiographia Literaria.”