When You Are Old, William Butler Yeats by poemelfFebruary 24, 2011

When You Are Old

When you are old and gray and full of sleep,

And nodding by the fire, take down this book,

And slowly read, and dream of the soft look

Your eyes had once, and of their shadows deep;

How many loved your moments of glad grace,

And loved your beauty with love false or true,

But one man loved the pilgrim soul in you,

And loved the sorrows of your changing face;

And bending down beside the glowing bars,

And paced among the mountains overhead

And hid his face among a crowd of stars.

I taped this poem to a trashcan at a rest stop on the Ohio Turnpike.  I know, I know– I’ve done the old poem-on-a-trashcan routine before.  If this poem-elfing were a Broadway show, I’d be shuffling around with a top hat and cane right about now.

I could pretend there’s some metaphoric connection between the trashcan and the poem.  Yeats is hoping not to be discarded by the woman he loves. . . or how’s this   . . . anything left in a trashbin on a turnpike is not likely to be retrieved. Just so Yeats tells his beloved, take me now or I’m as out of reach as the stars.

But placing the poem here was a practical decision, not an artistic one.  Mostly I wanted to display it where it would easily be seen. I was also thinking that rest stops are such sterile places (or so we hope, considering that the two prescribed activities are eating and eliminating) that it would be a public service to leave behind something soulful and beautiful.

I love Yeats so much I could poem-elf him exclusively.  Of course I’m partial to all things Irish and Yeats especially, since I’ve always thought he looks like an old friend of my husband and mine (Paul, if you are reading, accept a compliment to your Irish good looks); and also because (I admit sheepishly) his poems are easy to understand, at least at first. (It will be no surprise to academic types that when it comes to poetry, I am a slacker.)

Yeats wrote “When You Are Old” for Maud Gonne, an Irish revolutionary and famous beauty.  He was obsessed with her and over the course of his life would propose to her four 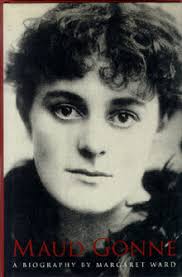 times. Like Pip’s love for Estella, Scarlett’s for Ashley, Yeat’s unrequited love for the six-foot tall, red-haired Gonne shaped his life. She drew Yeats into her political causes and awakened his nationalistic feelings. He wrote a play for her to star in.  He even, after Maud’s final rejection, proposed to her daughter.  With her permission. (She had other boundary issues with mating and mothering—she had sex on her infant son’s grave in the hope of conceiving his reincarnation.)

This poem is just plain painful and not a little bitter.  The soothing rhythm almost sounds like a lullaby, but the singer is one boiled rabbit short of stalker status. People writing love poems usually praise the beloved’s face and figure, exaggerating their attractions: eyes like diamonds, breasts like pillows, and so forth.  But Yeats conjures up an image of Maud in her hoary-headed years, all beauty gone, alone and talking to herself, a doddering old biddy, drifting off to sleep by the fire.  Not very sexy, unless your name happens to be Harold.

While Yeats does pay the requisite compliments of love poetry—he notes her glad grace, beauty, and a dewy soft look in her eyes—his compliments come with a veiled threat.  Not only will she lose her beauty someday, but if she rejects him, she’ll never have any love at all. Out of all her admirers, only he truly loves her.

I suppose if he wasn’t a little off-kilter, a little psychologically suspect, he wouldn’t be that much fun to read.  And at least he loves Gonne for the right reasons. He sees beyond her beautiful face and lively spirit: he actually loved the sorrows of your changing face, that is her loss of beauty and her sadness.  (After just reading that men are turned off by the odor of women’s tears, I say, three cheers for Yeats, although he may have just been congested.)  Every woman, no matter how much time she puts into her appearance, and maybe especially if she puts excessive time into her appearance, longs to be loved for who she is.  What woman wouldn’t swoon to hear a man tell her he loves her pilgrim soul?  Yeats is a wily seducer, but his success was limited, at least with Maud, to the page. 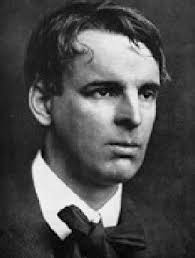 Born in Dublin in 1865 to a Protestant family, Yeats spent much of his childhood in London.  Nonetheless, Yeats supported Irish independence. He loved and collected Irish folklore, was a key figure in the Irish Literary Revival, and helped found Dublin’s Abbey Theater.  He was the first Irishman to win the Nobel Prize, and served for six years as an Irish senator. At age 52 Yeats eventually married a woman half his age.  Theirs was a happy marriage but not a monagomous one, at least on his part, the old goat.  He died in Paris in 1939.