Gluttony at the grocery store

My pictures could have been more artful.  But there I was, loitering in front of the frozen food cases, pretending to read the ingredients in a chicken pot pie, waiting for the aisle to empty, getting more nervous and paranoid by the second. I felt like I was doing something offensive to my fellow shoppers or maybe even illegal.  So as quickly as I could, I pointed, clicked and split.

Lard up the dressing, fry chicken in

Carry it dribbling to gray climes, snowed with

surrounded by roast potatoes wet with

Salt on those fries! Boil onions

Turkeys die only once,

do, make the plate pretty;

and order a sugar Cream donut, pack 2 under

Pass out in the vomitorium come back cough

up strands of sandwich still chewing

Back to central Europe & gobble Kielbasa

swallow salami in Munich with beer,Liverwurst

on pumpernickel in Berlin, greasy cheese in

a 3 star Hotel near Syntagma, on white

in East Germany — have another coffee,

And this is a plate of black forest chocolate cake,

Our western culture wavers between viewing gluttony as a virtue, in the mode of Eat, Pray, Love/Paula Dean/Barefoot Contessa, in which a big appetite signifies a big heart, a joyful spirit, a lust for life; and seeing it as sinful, hence our obsession with weight loss and disgust for the fatties on reality shows.

Condemnation of gluttony is nothing new.  Sixth century Pope Gregory included gluttony in the list of Seven Deadly Sins, providing painters (see Hieronymous Bosch here) and writers ever since with rich material. In The Divine Comedy, Dante confined gluttons to the third circle of hell and described their fate as such: “In life they made no higher use of the gifts of God than to wallow in food and drink, producers of nothing but garbage and offal. Here they lie through all eternity, themselves like garbage, half-buried in the foetid slush, while Cerberus, the guardian, slavers over them as they in life slavered over their food.”

Ginsberg, a most unlikely ally to the moralists of old, subjects his gluttons not to hell but to heart attack and diabetes.  He connects the excess fat, sugar, meat and salt of the western diet with violence, aggression and indifference to the less well-fed.

Old etchings like this one aim to curb gluttony with repulsive depictions of its punishment in hell.  The poor gluttonous souls are forced to eat rats and toads.  Ginsburg does the same by force-feeding us buttered veal medallions in creamy saliva till we pass out in the vomitorium and return to the table only to cough/ up strands of sandwich still chewing/pastrami.

But his sensibility is more Hieronymous Bosch than Dante-esque.  Ginsberg is having a lot of fun here. His exuberance and energy spill out on the page. The poem is an explosion.  It’s too much.  Our diet is too much.

Like so much of Ginsberg’s work, “C’mon Pigs of Western Civilization” is written to be performed. Listen here and you’ll get a better sense of the humor and the helter-skelter, stuff-everything-in-your-mouth pace.

And then hang a copy on your refrigerator for aid in dieting or Lenten sacrifice.

To say anything about Allen Ginsburg feels tired and superfulous.  Beloved by some, despised by others, he’s become a cultural touchstone, representative not only of the Beats, but of the LSD flying free ashram caftan flower power (he coined the phrase) sixties. Sometimes he seems more an historical event than an actual person.  Yet his life fascinates me (can’t wait to see the James Franco movie) and a quick sketch is merited. 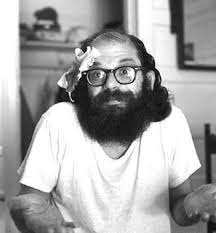 He was born in New Jersey in 1926 to Russian-Jewish parents.  His mother was a sometimes-nudist and passionate Communist who took young Allen and his brother to party meetings. She was also an epileptic and a paranoid depressive.  When Ginsberg was a junior in high school, she insisted he take her on the bus to a therapist. She didn’t come back.  She spent the next fifteen years in mental institutions, subjected to electric shock, lobotomy and early death.  Wow.  He was just a boy, 15 or 16, and he had to escort his suffering mother to a prison of sorts.  I just can’t get over that. I think of the deep and tender attachment teenage boys carry for their mothers, underneath all their bravado and separation struggles, and Ginsberg’s childhood just rips me up.

Growing up in such a household, it’s no surprise he was drawn to counter-culture.  He was an outsider from the get-go.  Besides, he was a gay man back in the dark ages for homosexuals. At Columbia he met up with Jack Kerouac, William Burroughs, and Neal Cassady.  They formed the Beats, the much-hipper and better dressed precursor to the hippies of the sixties.  You can see Ginsberg and the other Beats in a movie they made with the delightful title Pull My Daisy (shown here with convenient Italian subtitles), a movie that’s been called a bohemian Seinfeld.

Ginsburg experimented with lots of drugs but by the early 60’s found he achieved the same altered state of consciousness with meditation and other practices of eastern religions.  He stopped using drugs just as more and more people were starting to use them.

In 1955, he performed “Howl” for the first time. Poet Gary Synder characterized the historic performance as “a curious kind of turning point in American poetry.”  Kerouac described the evening in On the Road (using fictitious names) this way: “everybody was yelling “Go! Go! Go!” (like a jam session) and old Rheinhold Cacoethes (Kenneth Rexroth) the father of the Frisco poetry scene was wiping tears in gladness.”

The attempt to suppress the poem in an obscenity trial backfired. Ginsburg became an international celebrity, and “Howl” has been translated into 23 languages.

Ginsberg used his fame and his charisma to advance his political causes.  He was outspoken against the Vietnam War and an early advocate of gay rights and human rights around the world.  He died in 1997 at age 71.

Error: Twitter did not respond. Please wait a few minutes and refresh this page.