Meanness and agony, but where is love?

I Sit and Look Out

I SIT and look out upon all the sorrows of the world, and upon all oppression and shame;

I hear secret convulsive sobs from young men, at anguish with themselves, remorseful after deeds done;

I see, in low life, the mother misused by her children, dying, neglected, gaunt, desperate;

I see the wife misused by her husband—I see the treacherous seducer of young women;

I mark the ranklings of jealousy and unrequited love, attempted to be hid—I see these sights on the earth;

I see the workings of battle, pestilence, tyranny—I see martyrs and prisoners;

I observe a famine at sea—I observe the sailors casting lots who shall be kill’d, to preserve the lives of the rest;

I observe the slights and degradations cast by arrogant persons upon laborers, the poor, and upon negroes, and the like;

All these—All the meanness and agony without end, I sitting, look out upon,

See, hear, and am silent.

Walt Whitman reminds me of my husband’s beloved octogenarian aunt.  Let me be clear that Aunt Joann is beardless and her sense of propriety prevents her from singing the body electric, at least in public.  But like Whitman, she’s relevant.   Her manners, language and habits may be of a different time, but she lives, vibrantly lives, in 2011.

Over 100 years after his death, Whitman is perhaps more relevant than any poet living today.  What other poet has his own Levi commercial and had a supporting role in a recent presidential scandal?

Speaking of scandals, “I Sit and Look Out” strikes me as a poem written by someone who’s been reading a lot of In Touch magazines at the grocery check-out.  Present-day examples abound to match his depressing litany of meanness and agony without end: 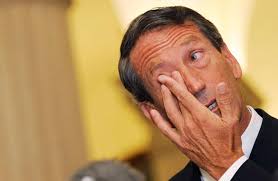 And so on.  The only image I can’t fit to our times is the famine at sea, and a little poking around on the web hasn’t yielded the historical reference.

Granted, my knowledge of Whitman is limited, but the poem seems unusually dark for him.  We think of Whitman recording America singing, not America abusing itself.  Part of the uncharacteristic heaviness of the poem is that there is no call to redress the wrongs, no resolve to help the victims, no retreat to nature as an antidote to man-made evils.  The poet just sits and observes, an indifferent god or one who feels but does not intervene.

Furthermore, the poet seems as fascinated by his own act of observing as by what he observes.  I sit are the first two words of the poem and the second to last line is syntactically twisted to emphasize his seated posture:  I sitting, look out upon.

Is he paralyzed by the inhumanity, overwhelmed?  Is the “I” communal?  Is he including his readers in the guilt of inaction, of seeing and hearing but remaining silent?  Is he giving a job description for writers? Is this what poets and writers do, observe and report?  Whitman did work as a journalist for much of his life.

Or was he intent on not boasting of his good deeds?  Because Whitman did act.  Throughout his life, he sent what little money he had to those with none, and during the Civil War he served as a volunteer nurse.   Here’s an excerpt from his poem “The Wound Dresser”:

I onward go, I stop,

With hinged knees and steady hand to dress wounds,

I am firm with each, the pangs are sharp yet unavoidable,

One turns to me his appealing eyes—poor boy! I never knew you,

Yet I think I could not refuse this moment to die for you, if that would save you.

This is the kind of compassion that earned Whitman the title “American Jesus.”

I posted this above a metro stop in Bethesda, a few blocks from the site of the horrific Lululemon murder. I was visiting my mother, another vibrant octogenerian, and rolled my suitcase around downtown Bethesda as I waited for her to pick me up.  Sitting outside a bagel shop, I listened, very Whitman-like, to young men inside argue about the Arab-Israeli conflict.  I watched as a homeless man approached a very large French couple a few benches down from me.  They pretended they didn’t understand what he was asking for.  (Do they not have homeless people in France?  Or do unshowered, bedraggled men with opened palms often approach strangers in their country merely to ask for directions or a book recommendation?)  I was up from the bench to help but a young girl reached the homeless man before I did.

“Hey, Warren, do you remember me?” she asked.  “I walked by you last week and you asked me for help and I felt really bad that I only had a dollar to give you.  So here,” she said, and she pressed a folded-up $20 bill into his hand.  They embraced.

Then I walked down the street and saw this over the temporarily closed Lululemon store:

A few days ago the shop re-opened with a beautiful stained glass window “love” above the store.  So it’s a like a church now, a church built on the remains of a martyr or a church that marks ground for love and not for evil.

A sign doesn’t stop evil, just as a poem doesn’t end meanness and agony, just as $20 doesn’t give a man a home. Love is just the only viable response. 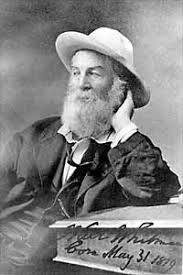 Walt Whitman sure has a lot of laudatory titles :  “poet of democracy,”  he’s called, “father of free verse,” “America’s poet,” to name a few.  Critic Harold Bloom proclaimed Whitman’s importance in his introduction to the 150th anniversary edition of Leaves of Grass:

“If you are American, then Walt Whitman is your imaginative father and mother, even if, like myself, you have never composed a line of verse. You can nominate a fair number of literary works as candidates for the secular Scripture of the United States. They might include Melville’s Moby-Dick, Twain’s Adventures of Huckleberry Finn, and Emerson’s two series of Essays and The Conduct of Life. None of those, not even Emerson’s, are as central as the first edition of Leaves of Grass.”

Whitman seems particularly popular these days on the internet with artists, students, musicians, and aspiring filmmakers.  Hundred of youtube videos exist featuring Whitman’s poems, but I like this one of playwright and performer John O’Keefe reading an excerpt from “Song of Myself.”  The man’s perspiration is alarming, but you get a great sense of Whitman’s exhuberance, his rhythm and musicality.