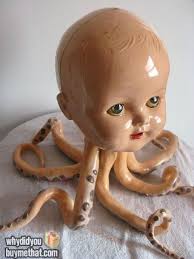 Worse than delivering a joke that falls flat is delivering a present that offends.  Offensive presents induce not just embarrassment but guilt as well, a guilt that can flame up and redden cheeks even years after.  Once I spearheaded a group gift of an adult tricycle for my mother, who was less ready to give up a two-wheeler than I had supposed.  She never said so, but she must have found the tricycle as infantilizing as adult diapers.  Which for the record I have never given anyone.  (Also for the record, Eat This, Not That makes a very bad gift unless specifically requested.)

Longer ago I gave a friend turning 30 a coffee table book called Mother.  I thought the book was brilliant and hilarious.  Somehow it didn’t occur to me that a photograph of an elderly woman walking through the grocery store carrying a crucifix would not amuse someone with a conservative faith who values reverence.  Nice book, was all she said.

Unfortunately, old faults die hard.  A month before my nephew’s wedding, I sent him the following poem via email:

for all the wrong reasons,

by the innocent muscles, bulging

by your naive ties, the colors

of painted scraps of sunset.

I was charmed too

about me: my serenity—

that mirror waiting to be cracked,

my flashy acrobatics with knives

How wrong we both were

and how happy we have been.

I was surprised to get back a response along the lines of, “Thanks for thinking of me, but this really doesn’t apply to us.”  I was baffled.  I thought the poem was so hopeful and sweet, such a good omen for his upcoming nuptials.  Why wouldn’t he?

My sister suggested that maybe he found the poem offensive.  A conversation with my nephew at his wedding confirmed my sister’s view, although Beau insisted that he wasn’t offended, he just didn’t get it.  But when pressed, he admitted that, to him, my sending I Married You was tantamount to saying he and his fiancé were getting married for superficial reasons.

Yeah, he’s right.  I was reading the poem as a long-married person.  My take-away from this poem is how happy we have been.  For him it’s I married you/for all the wrong reasons.  My nephew is one-half a couple that have been together for a long time, so they know each other well enough to have moved beyond the type of initial impressions outlined in the poem.

By way of apology, I’ll try to explain myself:  for me the poem says that marriage is a long process of partners discovering each other.   Accepting and loving those things  we discover in the ensuing years–traits and interests that didn’t register with us at the beginning or that developed over time–is the beauty of commitment.  Also, the outward characteristics that initially attracted partners to each other—bulging muscles, a cooking hobby, a calm demeanor—can change, but the truth of a person remains the same.  When selecting a lifetime mate we unconsciously recognize these deeper truths, and if we’re lucky, those truths are ones we need and admire.

This is not a poem to send to a newly engaged or married couple.  It’s like giving new parents a book on teenagers and gonorrhea and expecting them to thank you for it.  Well, not exactly, but you get my contrition.

I’ll save this poem for anniversaries.  But now that I think about it, maybe really happy ones only.