File under strange, but true

Above the City, James Laughlin, Uncategorized by poemelfSeptember 10, 2011

In last Sunday’s New York Times former science reporter John Schwartz wrote an op-ed piece about the eerie accuracy of novels in predicting the future.  I can’t make any such claims for poetry–-not least because the scope of my poetry reading is so small and for all I know there exists a tradition of science fiction haiku—-but what I can claim for poetry is an accuracy in describing the human condition.  Centuries-old poems can read as fresh, with a few adjustments of diction, as if they were written today. 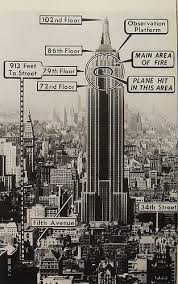 Which brings me to a poem written in 1947 that has an eerie relevancy to this Sunday’s marking of the tenth anniversary of 9/11.  I came across “Above the City” a few months ago while I was researching James Laughlin, American poet and publisher extraordinaire.  (You can read that post here.)  The subject of the poem is another tragedy in Manhattan involving a skyscraper and a plane.  On Saturday, July 28, 1945, an Army pilot, disoriented in heavy fog, crashed a B-25 bomber into the 79th floor of the Empire State Building. Miraculously only 14 people died.  (If you’re weary of 9/11 coverage, click here to read more about the 66-year old crash.)

The poem’s tone is conversational, almost off-hand, surprising for so dark a subject. But the lightness is balanced by the last few lines, words which have only gotten weightier with the passage of time.

I’m posting it as a curiosity, not as any part of a tribute or statement.  September 11 is a day of mourning those who lost lives and of tribute to those who saved others or tried to.

You know our office on the 18th

floor of the Salmon Tower looks

right out on the

Empire State and it just happened

we were there finishing up some

a new book that Saturday morning

when a bomber roared through the

flames poured from the windows

into the drifting clouds and sirens

the streets below it was unearthly

but you know the strangest thing

none of us were much surprised be-

cause we’d always known that those

progress sooner or later would per-

form before our eyes this demon-

(Apologies for the format.  I can’t get the correct spacing with WordPress.  The third line of each stanza should be indented.)