A request to take notice

There always ought to be a willingness

to receive the roadside’s offering of flowers

to be brought home and put in fruit-juice glasses

on the windowsill above the kitchen sink

so we can stand there and admire alien beauty

the like of which we imagine in a small way

while looking for a speck in a child’s eye

and noticing suddenly that ring of celestial blue.

I knew just where to put a poem by Detroit native Michael Heffernan:  the entrance to University of Detroit Jesuit High School.  Heffernan attended U of D, just south of the infamous 8 Mile, an all-boy, racially-diverse Catholic institution and the oldest functioning school in Detroit.  There he wrote his first poem.  The poem grew out of homework assigned as punishment after one member of the class left a jock strap on the teacher’s chair.  Heffernan remembers only the beginning of the poem he wrote about the Maine coast—

The rock, untouched by human hands,

Away from all the other stands

but credits the wise punishment with opening his eyes to a career he had never before considered. 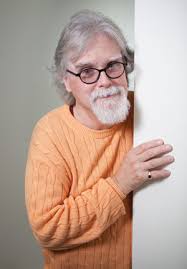 had another reason for bringing Heffernan’s work back to his alma mater.  The school website doesn’t list him among its notable graduates.  That list is headlined by detective novelist Elmore Leonard and rounded out by the head of Google AdWorks and two NFL players.  I respectfully suggest that the winner the Porter Prize for Literary Excellence, two Pushcart prizes, three fellowships from the NEA, and the Iowa Poetry Prize, not to mention the writer of nine books of poetry, should be given his props.

Location fore-ordained, the question was, which poem from those nine books to use?  When a hometown boy makes good, you don’t want him showing up for the parade in a bathrobe.  I wanted to bring the best of Heffernan, but I also wanted him to be read by the students and teachers who passed by on their way home.  I needed a short poem, straightforward, with lots of white space—none of which characteristics are typical of a Heffernan poem.

Fortunately “Town Water” fits the bill, and even better, carries echoes which might be familiar to U of D students. The first line

There always ought to be a willingness

to receive the roadside’s offering of flowers

Both declarations juxtapose grand pronouncements with the commonplace.

Everyone reads “The Red Wheelbarrow” in high school and most everyone thought it silly at the time—who cares about the dang wheelbarrow, says the teenager, most likely in saltier terms.  But more than a few people still remember, years later, that startling image of the white chickens standing next to a rain-glazed wheelbarrow.  So with “Town Water.”  Heffernan’s picture of flowers in a fruit juice glass on the windowsill above the kitchen sink shares the precision and delicacy of William’s imagery.

At the end of the poem comes another echo these U of D students might recognize, from the gospel of Matthew:

How can you say to your brother, ‘Let me take the speck out of your eye,’ when all the time there is a plank in your own eye?

Heffernan’s poem turns that image on its head. The adult looking for a speck in the child’s eye is not, as in Matthew, overwhelmed by his own faults.  He’s overwhelmed by unexpected beauty.  The celestial blue of the child’s iris is a small beauty but startling, just like the alien beauty of the roadside flowers.  Both beauties are small replicas of a larger, unnamed beauty that we can’t fully imagine.  If ever we have hope of seeing such beauty, openness and willingness to see are required.  It’s what Wordsworth is talking about when he writes,

Come forth, and bring with you a heart

That watches and receives.

Seasonally this poem may be inappropriate for a wintry Detroit landscape, but thematically it’s just right for a building that houses teenage boys.  The halls of U of D funnel boys through an awkward growth as they muscle their way to manhood.  Here they make mistakes, act inappropriately, stupidly sometimes and rude, but suffer silently too, and in dark moments wish they were home.  No less often they act kindly, show brilliance, make adults laugh.  It’s all there.  You just have to see the weeds as “roadside flowers” and be willing to put them in a vase as if they were roses.

My teenage son used to block me when I was rushing around the kitchen and give me a bear hug.  I’d try to cut it short but he’d hold on tight and say, half-teasingly, “Settle down there, Mother.  Someday this is all going to be gone and you’ll wish you had it back.”  How right he was, that far-sighted boy, now gone off to college.  What was I rushing for?  To put the rice in the pot?  To turn off the tea kettle?  Answer the phone?  Check my email?

And there was my gangly flower in the juice jar, saying, notice my alien beauty.