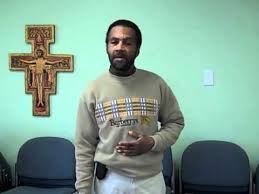 If you think, as I sometimes do when a particularly arcane poem shows up in my inbox courtesy of the Academy of American Poets’ poem-a-day feature, that poetry is written by and for the same kind of people who prefer wasabi truffles to straightforward chocolate caramels; or if you think that classic poetry has as much relevance to your life as the owners’ manual to a steam-powered lawnmower, it’s time to meet Jeffrey, poetry declaimer extraordinaire.

first heard about Jeffrey from a newsletter put out by Detroit’s Capuchin Soup Kitchen.  In CSK’s lunch and dinner line, Jeffrey recites poetry from memory for the other guests.  I watched a video of his performance and I was enchanted.  So I tracked him down to speak with him over the phone.

Jeffrey’s poetry passion was born out of tragedy and boredom.  In 1988 he was hit by a moving car.  He was in a coma for ten days with a traumatic brain injury.  He recovered but in the years that followed he was homeless.  With little to do on the streets all day, Jeffrey went to the library.  He happened upon a book with Langston Hughes’ poem “Gods.”

Jeffrey never liked poetry when he was young.  He didn’t even like English class.  He left school after tenth grade.  But Hughes’ poem he liked.  He liked it so much, he wrote it down.  Then he read it over and over till he memorized it.  He recited the poem as he walked down the street or rode the bus.   “It was something to do,” he explained.

Here’s the poem that first inspired him:

And the ebony gods,

And the gods of diamond and jade,

Sit silently on their temple shelves

Yet the ivory gods,

And the ebony gods,

And the gods of diamond-jade,

Are only silly puppet gods

That the people themselves

That was in 2000.  Since then Jeffrey is no longer homeless and has added to his poetry repertoire.  I asked him how he selects the poems he memorizes.  It turns out his criteria is the same criteria I use in selecting which poems to poem-elf, that is:

The difference in our selection process is that length doesn’t matter to Jeffrey and I always choose the shortest poems I can find.

By way of demonstrating the kind of poem he’s drawn to, Jeffrey recited “Ballad of Birmingham” by Dudley Randall (1914-2000).  Here’s the first two verses:

“Mother dear, may I go downtown

Instead of out to play,

And march the streets of Birmingham

In a Freedom March today?”

For the dogs are fierce and wild,

And clubs and hoses, guns and jails

Aren’t good for a little child.”

His delivery, even over the phone, was powerful.  When he finished, the hairs on my arm stood on end.  You can read the poem in its entirety (and surprise ending) here.

Watch Jeffrey’s performance yourself on youtube.  Please do.  This man deserves an audience.  Wouldn’t it be great if the number of views on these videos jumped out of the teens into the hundreds?

Here’s Jeffrey reciting Edgar Allan Poe’s “El Dorado” and Maya Angelou’s “Preacher, Don’t Send Me.”  Link here to hear “A Psalm of Life” by Henry Wadsworth Longfellow.  And here for another Longfellow poem, “I Shot an Arrow into the Air.”

I confess that before I heard Jeffrey recite these poems, I didn’t like any of them.  The dramatic poems of Longfellow and Poe were too much trouble to plow through, and the non-prose writings of Maya Angelou sometimes bored me.  But Jeffrey has won me over. He brings the poems alive in a way I never would have experienced just by reading.  With his inflections and gestures he inhabits each poem and makes even the oldest verses sound contemporary and relevant.

Jeffrey has a gift to share.  Click and you’ll not only enjoy his gifts, you’ll give a gift back to him.