Probably too much information

Poem in Praise of Menstruation

is a river
braver than this
coming and coming in a surge
of passion, of pain if there is

Disclaimer:  Poem Ef is not responsible for this poem-elfing.

This summer I had a surprise visit.  A delightful visit from my long-lost period.  That may sound a tad precious, but when anything is taken from you forcibly—your sense of smell, a tree limb that your neighbor hacks off in a territorial snit, a boyfriend, even an insufferable boyfriend—its value increases regardless of former feelings.

I thought five years of Tamoxifen had permanently stopped my menstrual cycle.  But a few months after I ended the Tamoxifen protocol, I felt unfamiliar cramping in my stomach.  Must be stomach cancer, I thought, obsessively thought, until voila! an exuberant bioplasmic stain appeared in my underwear (on a bike trip, involving a make-shift pad of leaves and bottles of water for rinsing out bike shorts in a roadside port-a-potty.  Best to forget that image the next time you mount the seat of a rented bicycle.)

Not to get all Ann-Margaret-how-lovely-to-be-a-woman on you, but it made me happy to feel the possibility of fertility again, to feel back in the game, ripe, full of sap and pulp. (Going too far, I pull myself back from the edge.)

Before she returned to college this fall, my daughter Lizzie hid this poem in a drawer where I had put my recently purchased boxes of feminine hygiene products.  And then she waited and waited for me to find it.  But I’d left the Red Tent, presumably permanently this time, so I didn’t open the drawer until recently, in search of tweezers.  I found the poem just in time for the launching of Lizzie’s new blog, Blood, Cramps and Tears, which celebrates, guess what, menstruation.

I was telling a neighbor about the blog and she asked, “Why would anyone celebrate a period?”  I started yakking on about fertility and life force and then I realized this conversation was going nowhere and if my neighbor would just read Lucille Clifton’s poem maybe she’d get it. Of course for those debilitated by period cramps or depressed by infertility, the monthly visit is nothing to celebrate.  Fortunately I never suffered those problems, and so this poem exactly expresses why I was so pleased to be getting a period again.

I’ll look closely at the poem and leave the menstruation party to Lizzie.

The first thing I notice is that Clifton has co-opted religious language and rhythms. The poem’s two references are biblical: “daughter of eve” and “mother of cain and of abel.” The unifying metaphor, the river, recalls the River Jordan, a place of baptizing and re-birth.  In this case, the river is one of blood, not water, but the blood isn’t signifying death or injury but life itself, beautiful, brave and faithful, just as Christ’s blood is for Christians.

The very rhythm of the poem is the rhythm of chanting and prayer. “If there is a river” is repeated in each stanza, gaining power and dramatic punch as the words are split with line breaks and white space. The power of that repetition (called “anaphora,” I’ve just learned) makes me think of a preacher’s booming voice.  Can you imagine walking into church or mosque or synagogue and hearing a sermon on the beauty of menstruation? How great that would be!  Some days the world seems to feed on hatred of women and disgust at our very nature. I’m speaking of course about the brutalization of women in third world countries, but also of the casual misogyny in the advertisements and frat-boy comedies of western culture.

The repetition of “if there is a river” reinforces the idea that the menstrual river is part of a never-ending cycle we are privileged to participate in.  The lack of punctuation and capitalization also work in service of that idea, allowing the poem to flow on (sorry) unhindered. Every word is connected to the next, just as menstruation connects every woman to another, both living and dead, connects women to animals and to the very earth we inhabit. 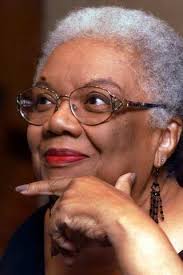 Lucille Clifton was born in New York in 1936.   Clifton’s literary and feminist sensibilities may have stemmed from her mother, a laundress who somehow found the energy to write poetry in the evening.  She had a chance to publish her work, but burned all her poems when her husband disapproved.  (This episode is recounted in Clifton’s powerful “fury.”)  Clifton herself was the mother of six, the poet laureate of my home state of Maryland for over ten years, writer of children’s books, and two-time Pulitzer Prize nominee.  She died this year at age 73.  Link here for a tribute to Clifton by poet Elizabeth Alexander.