Downtime at the Department of Motor Vehicles

So I said to the short order cook (because I

think he owns the joint) what did Santa bring

you: a fairly aggressive bit of humor, since

I hardly know the man: my wife and I stop

there occasionally on the way to Syracuse

because it is so busy, the eggs are right, and

the waitresses friendly: when he says, Oh,

some of this and that: so I said, a boat:

(checking to see if he was really rich): a

gun, I said–maybe he was just one of the

I don’t think he ever did say what he got,

some clothes, maybe: he was turning too many

eggs, jigging hash browns: on the way to

Syracuse, I finished it in my head: he got

angry: who’s asking, he says: so I try to

bring him down: I’m too old to rise up to

risibility: I said, I’m a little older than

you, so I was wondering, because I was disappointed

in myself when my wife asked me before Xmas

what I wanted for Christmas: I couldn’t think

of anything: what does it mean to want nothing

from Santa: so I just wondered what sort of

thing you might have wanted, or if you had

liked what you got: well (reader) this last

part doesn’t sound as good as the way it came

to me around Lafayette: I have a little tingle

of fear that the next time I stop there, the

you don’t have to ask me what Santa brought me

not going to ask about those eggs….

If this poem were a monologue delivered across a dinner table by an old man of dear acquaintance, I would nod my head with feigned interest and wait for an opportunity to clear the dishes. Would you please just get to the point? I would be thinking. The story in the poem is needlessly long. Nothing happens, but the speaker goes on and on. The old man asks the short order cook what he got for Christmas. Despite the old man’s attempts to engage his distracted listener, the ensuing conversation barely rises to the level of banter.

But this is a poem, a shaped, edited and crafted work of art, not a transcription of a one-sided conversation. So I read it carefully. I read it again and again. And maybe because I lost two fathers this year and watched friends grieve their own fathers, I no longer find this poem merely rambling. “Wrong Road” is pointed, weighty, and a little heartbreaking.

Much is going on behind the corny chatter of this friendly old fellow. He begins with what he considers an “aggressive” question, and he keeps upping the ante from there. Can’t you just see his wife rolling her eyes when he suggests that the cook has guns? Later he finishes the conversation in his head, and imagines that the cook gets angry with his questions. “Who’s asking?” the cook says, like some trigger-happy character out of an old gangster movie. And then the speaker admits to a “tingle of fear” when he thinks of meeting the cook again. There’s a lot of violence under the surface of an event-free road trip.

That latent violence and the title of the poem remind me of Flannery O’Connor’s much-anthologized story “A Good Man is Hard to Find.” In that story, a voluble grandmother sends her family down the wrong road where they meet an escaped convict called The Misfit. She yakkety-yaks her way through the whole episode, and eventually has a moment of connection with The Misfit, who kills them all anyway. The difference between O’Connor’s story and this poem is that the violence in “Wrong Road” is all imagined, perhaps even desired. But why would this old man, who enjoys the busy diner and the friendly waitresses, dream of violence?

Because when a man gets old and retires, he doesn’t don’t live in a testosterone-driven world anymore, a world where men are always competing, where a man must act and react, and charm or banter or fight his way out of situations. If he’s not careful, he can feel useless and superfluous.

Typically ill health and death are the main events in the lives of old people. And so the poem’s speaker invents an alternative event, an amusing, potentially dangerous encounter with a younger and more important man (at least to the diner patrons). In this way he feels part of the busy world, he feels that he matters, that his life still matters, that despite the fact that he can’t think of a single thing he wants for Christmas, he is still very much alive.

Although he asks so poignantly, what does it mean to want nothing, he really does want something. He wants connection. And he tries to get it in such an amiable, pleasant fashion that you hardly see the desperation and fear behind it.

But he is more than just an old man. First and foremost, he’s a writer. All the while he’s trying to engage the cook, he’s really engaging his future audience of readers and flexing his creative muscles. Yes, retired people make more out of small incidents than busy people, but so do writers. Writers experience events from a distance, picking apart the action, re-working it, drawing it out, packing it with drama. This man isn’t just making up a drama in his head—he’s creating a poem, an act which is itself a stand against irrelevance, against invisibility and death.

I left this poem at the motor vehicle department when renewing my license. I thought I’d leave a little reading material for someone bored with the unavoidable waiting. After I taped the poem to a self-service registration renewal machine, I wondered if I was defacing government property, and I started working out a scenario in my head where someone traces the Poem Elf stamp on the back of the poem to me and an officer comes to my door. . . and here I am, just like the old man, inventing drama for myself. 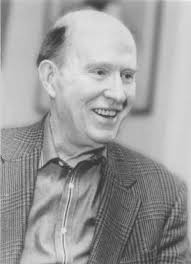 A.R. Ammons died in 2001 at age 75. He was born in the south on a tobacco farm, served in the Navy during WWII, writing poems aboard ship, and then worked as a school principal, a realtor, and a sales executive, all before landing as faculty at Cornell University.

I have read and enjoyed a few other poems of Ammons– they’re easy to read and funny sometimes–but I had no idea he was held in such high regard. He’s been compared to everyone from Walt Whitman to Emily Dickinson. No less than Harold Bloom calls him destined to become a classic of the 20th century. Jeez. Time for a re-assessment. It’s like discussing the weather with someone in the grocery checkout and finding out later she was a world-renowned climatologist in line for the Nobel Prize.

In the last week I’ve turned several times to my favorite of Ammons’ poems, “In View of the Fact.” In the poem, he’s mourning the death of friends. The last lines are beautiful, and I put them out here in memory of my beautiful, life-loving friend Barb:

until we die we will remember every

loss: then we will, as we must, leave it to

others to love, love that can grow brighter

and deeper till the very end, gaining strength

and getting more precious all the way. . . .