Yesterday I posted Vladimir of Lviv’s imitation poem of Carl Sandburg’s “Chicago.”  (Vladimir is a student in my sister Ceci’s ESL conversation class. All the students were asked to write a poem about home using Sandburg’s poem as a model.)

Today I’ll highlight excerpts from a few more student works. I wish I could include everyone’s, because all the writers, those featured here and those who aren’t, amaze me.  After fourth or fifth grade, writing poetry is an unfamiliar, challenging and potentially embarrassing activity for most people, but writing poetry in another language is more difficult still.  Kudos to all!

Come and show me another city with historical treasures, so precious and

protected the enemy could not drop a bomb on them,

Here is a place where people live in harmony with the beautiful nature of the four seasons.

Grand as the Heian-jingu, tranquil as the Ryoanji rock garden,

She closes the poem with this lovely testament to her city’s endurance:

Once a prosperous capital, center of culture, now carrying on their

practice to the next generation, creating meticulous craftwork,

Restoring instead of destroying, caring, valuing, respecting, proud to be

“Restoring/Restoring instead of destroying” is an artful little phrase that I’m enjoying/enjoying.

Myongjin A. of Kyongjoo, South Korea begins her piece with the opposition of crumbling antiquities and present vitality:

City of the Shilla Dynasty

Amanda L. of Brazil wrote of her new home, Chicago:

From now on, every time I’m in Chicago I’ll think of the buildings “scratching the sky, catching the wind.”  Even someone whose native language is English would be proud to have written those lines.

Natalia V. of Belarus also wrote of her new hometown:

Such a tender image!  Does anyone hear South Pacific’s “Hello, Young Lovers” in the background?  I get a sense of Natalia remembering something beautiful from her own past as she watches new love in her new country. 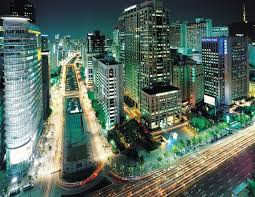 Finally, Esther C. of Korea writes this pithy and powerful portrait of her home country:

Yet hoping for peace

My country, dreaming of unification